Check out the excerpt of my latest book Cackle Lands 4 Eyes Wide Shut from my hyena series.... 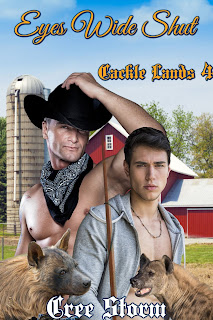 “Oh thank the gods. I thought I smelled you. Ruben is going to get Orson and I came to get you and...oh my...it’s bad. I mean really bad, War. They...”
Shifting to his human form, Warren squatted, down, “Calm the hell down Tiller I don’t understand a word you’re saying.”
“Oh my I know it’s rude and I shouldn’t be looking, but...well it’s all right there in front of me and I can’t help it. You are a blessed, blessed man I must say. I just...”
“Tiller.” Warren growled. “Focus damn it. What’s bad? The fight? I’m trying to get there to help but I can’t fucking find them! Do you know where they are?”
Tiller was good friends with Mikka and Nyx. Hell he and Ruben had helped save Mikka’s life when he had been being held prisoner by his own mother. They lived on their lands but pretty much only came around to see them or the mates so Warren didn’t have a lot of experience with any of the jackals. They were big on security for the cackle and spent a lot of time running the perimeter as well as working with Louise and her cackle in training.
Tiller tilted his head to the side, in confusion, “But they’re right over there behind the big hill.”
Warren looked in the direction Tiller was pointing but still saw nothing. “How about you take me to where this fight is and I’ll just follow you?”
“I can do that. But I think you should shift. That dangling thing is what the military would call a WMD.” Tiller muttered before popping his beaver head back down into the hole.
It took them less than three minutes to get to the top of the hill Tiller had told him the fight was happening at. Tiller popped his head out saying, “Well, aren’t you going to help them? Dang dude, aren’t you the predator here? I mean they are kind of kicking ass and all but...”
“Tiller I don’t see anything.” Warren said in exasperation.
Orson and Jackson appeared with Darby and Cobalt. They looked around asking, “Where the hell are they? I thought you said they were here?” Orson ground out.
Tiller pulled his tiny groundhog arm out of the hole and pointed it down below the hill. “They’re right there. Are you blind?”
Warren blinked in shock. There were bodies littering the forest floor as a battle played on with shifters all different types. They were mostly in human form and damned if the smaller ones weren’t kicking the larger men’s asses.
Anxious to find his mate, Warren looked and let out a harsh breath when he saw Breeze holding a large staff and using it to fight Lenox himself.
Lenox was in his hyena form, his teeth bared as he lunged towards Breeze. Somehow Breeze was able to flip his stick into the other hand and land a hard blow to Lenox’s side knocking the hyena hard onto the ground.
“Who are those people fighting Lenox’s men?” Jackson asked sounding as impressed as Warren was.
Warren really looked at the men fighting and had to blink back his amazement. “I think...I mean I...wow that ‘s the guys staying with Breeze.”
“Who is that fighting Lenox?” Orson asked.
Warren looked in the direction Orson was pointing and he gasped, “My mate.”
Orson and Jackson looked at Warren in shock. Jackson asking, “I thought he was blind?”
“He is.” Warren said still watching the scene below.
There had to be fifteen men down there fighting against Lenox’s sentinels. Lenox never lacked on training yet those men...or shifters...prey at that...were fighting them as if they were not just their equal but professional martial artists.
“We need to get our asses down there...now!” Orson snapped and then shifted.
Osha and his brothers took off along with Orson and Jackson.
Warren had to snap himself out of the stupor he was in so he could join in the fight.
It didn’t take but mere seconds for Warren to shift and take of to help save his mate.