This month, I'd like to invite you to the Frostbite Falls Christmas Ball. Its the biggest event of the season and everyone is attending. Grab a drink, drop a present off under the tree and settle in to enjoy the party from four perspectives and four very different women. 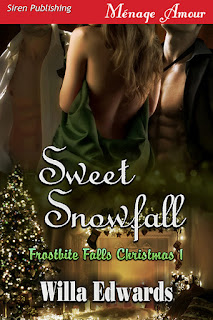 Experience the ball through Grace Perry's eyes, the town's librarian, and her two favorite guys, Nash and Cassidy, in Sweet Snowfall. She's got a secret that she wants to keep to herself, but after a little tumble in the snow, her secret is exposed, at least to two guys. Luckily, Nash and Cassidy are just as fascinated by her secret as the shy girl behind it. 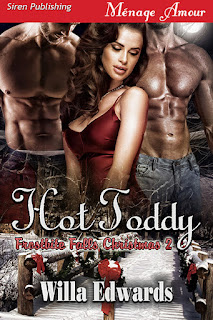 Attend the ball with Lydia Prescott  while Kyle and Chase Manning decided to finally make a move on the woman they've lusted after for nine long months in Hot Toddy. Finally on the mend from being left by her fiancé for his boss's daughter, Lydia is ready to have a good time, and Kyle and Chase are more than willing to show her just how much fun Frostbite Falls can be. 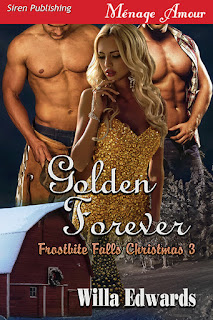 Force yourself attend the ball with Riley Willis, in Golden Forever, thought she'd much rather be on the ranch. Roping horses and sheering sheep. But at least she has her best friends Jasper and Logan to keep her company. Until they start looking at her funny and making comments about her gold dress. Comments that have even more frightening feelings spreading through her. 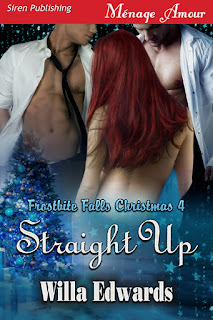 And finally, finish planning the night with Victoria Willis, the unofficial princess of Frostbite Falls, as she creates the perfect party, not just for the town but for her and two very special guys, the Sullivan cousins, in Straight Up. Though its the after party that she's really interested in. And no matter the party, Victoria always has a plan for how to make it the best night ever. Sam and Trevor have no idea what they are in for.
http://www.bookstrand.com/book/straight-up

All the Frostbite Falls Christmas stories are no available, either for download or preorder.

Each story can be enjoyed on its own or in whatever order you wish. While there are hints in each book about the other girl's stories (my favorite being in the last) there is nothing in any book that would prevent you from enjoying the others. So whether you start on book one or book four, none of the magic of these holiday tales will be lost on you.

I hope you'll take me up on the invitation and stop by the Frostbite Falls Christmas Ball this holiday season. Pick up a festive drink or some hors d'oeuvres and enjoy the decorations . Just make sure that when you sneak out of the party with your two favorite guys, no one sees you going.

Beautiful covers and I'm sure the contents equal them....More power to your new release...