Life As An Island by Anya Summers


One of the challenging, frustrating, and rewarding aspects of creating my very own island getaway in my latest series was how I could add all the amenities and features I would want to have on that once in a lifetime vacation. That’s sort of how I devised it. I researched brochures and online travel websites for these fabulous tours to exotic locales. It helps too, that I have begun making preparations for my first trips abroad in the coming years to Ireland and Scotland and have lists of things to see, do, and explore. I absolutely plan on hugging a few standing stones a la Outlander. I’ll let you know how that turns out.

As I have created the ins and outs on Pleasure Island, a tiny strip of land I created in the Bahamas about an hour south via boat from Nassau, there were a few things that became startlingly clear. One of the interesting things I realized that I was also imagining a reflection of the life I have fashioned for myself. Not the intense love scenes between my characters, mind you, but developing the type of life that is so worth living that at your end of days you skid into the grave sideways saying what a ride. It’s something I’ve worked hard to cultivate in my private life.

Now, all the heroes and heroines in subsequent books who have met and fallen in love on the island, did so because Jared brought the life he wanted into fruition and is continuing to expand on that dream throughout the series. And not to get maudlin or too introspective here, but that is what I, personally, have been working to establish and make within my own life, my life under my terms. So this entire series at its heart has been art imitating life and vice versa on that deeper level of consciousness.

As I’m nearing the completion of this series, I can say that I’m living my best life yet. Don’t be afraid to go seek out yours.

I hope you enjoy my latest installment, Duets & Dominance, where we meet Lizzie and Solomon, two long time best friends who shared a scorching kiss at another engagement that neither have been able to forget. We’ll see if they take a risk to chase after the love they hold for each other. 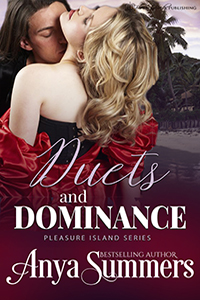 Elizabeth “Lizzie” von Klepper has a problem of epic proportions—she’s the oldest virgin in the world. Invited to perform on Pleasure Island with her best friend Solomon, she devises a plan to seduce him, and rid herself of that infernal status. After all, they shared a mind-blowing kiss a year ago and that has to count for something, right?

Solomon Ventura adores Lizzie. She’s been his best friend since their humble beginnings at Julliard, but deep down he’s yearned for her. For more. And ever since he tasted her, a stolen kiss he hasn’t been able to forget, he cannot seem to stop his mind from conjuring up myriad fantasies with Lizzie in the starring role. But he’s not the man for her. She’s light where he is dark, and his brand of love would shatter the only woman he’s ever cared about.


Will the best friends move their relationship out of the friendzone? Or will a week spent on Pleasure Island destroy them both? 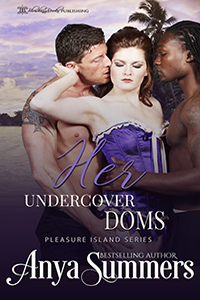 Sherry can't believe her luck. She followed a Dom to the Bahamas only to have him fall for another. To make matters worse, that same Dom has issued her an ultimatum: either submit to Patrick and Nick to become a better sub, or leave the island. The last thing she wants to do is head home a failure.

Patrick and Nick have been chasing the gorgeous beauty and jump at the chance to entice her into their arms. But will a hurricane and investigation into a sex trafficking ring tear them apart? Can Sherry forgive the two Doms their lies and accept them?

Anya is a bestselling and award-winning author published in multiple fiction genres. She also writes urban fantasy and paranormal romance under the name Maggie Mae Gallagher. A total geek at her core, when she is not writing, she adores attending the latest comic con or spending time with her family. She currently lives in the Midwest with her two furry felines.

Congrats on your newest release. Sounds like a hot series. :)