Did you take home your Naked Cowboy yet?

Here they are again, eight of the sexiest Naked Cowboys you've ever met. Can't live with them, can't live without them. 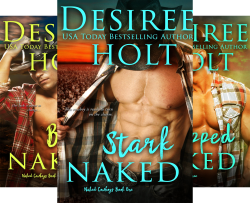 Stark Naked .. THIS BOOK IS FREE!
After Reenie bumps into her friend’s very sexy, very naked brother, she decides to keep her distance, but he shows up at her door the next morning asking she doesn’t let first impressions ruin what could be a whole lot of fun.
Matt quickly realizes none of his usual lines will work on Reenie, which only adds to his desire to get her to lower her defenses around him.

ALL THE REST ARE JIUST 99 CENTS.

Buck Naked
When a cowboy stops to help Amy change a flat, she’s convinced her run of luck isn’t going to change any time soon. Buck is far too confident and cocky for her. Buck made his mark on the rodeo circuit, but the lifestyle left its on marks on him. He knows he should tell Amy about his past before she hears it elsewhere, but every time he opens his mouth, all he can do is kiss her…

Stripped Naked
Jinx thought moving from New York to Rowan Country would mean an end to reporting on murders and dealing with grumpy police who see her as a nuisance. After only a few weeks on the job, someone finds a dead body in a ditch, and Sheriff Dillon Cross is butting heads with the sexy local reporter. They get on like two angry hornets trapped in an upturned glass, but soon it’s more than heated barbs they’re exchanging.

Bare Naked
Georgie invests everything she owns in a dilapidated B&B in Saddle Wells, Texas, so when a rough-around-the-edges cowboy offers his handyman services, she accepts his help in exchange for room and board.
Cade’s a down-on-his-luck cowboy with a reputation so bad no one will hire him. Luckily for Cade, newcomer Georgie doesn’t know anything about the man he used to be. But not everyone is ready to give Cade a second chance, and their newfound happiness could disappear like smoke.

Naked Desire
All Cynthia has left after her divorce is her grandfather’s secret barbecue-spice-rub recipe. She’s determined to start over in Saddle Wells, but she’s totally unprepared for her reaction to the carpenter her new friends recommend.
Jesse is more than happy to renovate Cyn’s storefront, but what he’d really love to do is tackle that self-doubt he sees lurking in her eyes, but first he has to convince her to give them a chance despite their age difference.

Naked Flame
On a night out, former cop Charity notices the brooding bar owner needs help, so she steps in and ends up right in his arms.
After two tours in Afghanistan, Liam now runs his dad’s bar. Having Charity around is a distraction, but he can’t seem to deny whatever there is between them.
When a criminal comes looking for revenge, Charity knows it will be better for everyone if she leaves town, but leaving Liam is more difficult than she thought.

Naked Heat
Andrew “Mac” McDaniel is on a mission to find the drunk driver who killed his twin sister, and his latest lead has brought him to Saddle Wells. When realtor Nida hands over the keys, something sparks between them. But even as undeniable interest turns to hot nights together, Nida is not sure she can stand by and watch him destroy himself when his investigation sends him on a path toward a potentially disastrous act of revenge.

Naked Hunger
Raising livestock in Saddle Wells isn’t as exciting as the pro circuit for local rancher Ryan, but the sweet new vet in town certainly livens things up. Sable claims she has no time for a relationship, so Ryan suggests they have some friends-with-benefits fun while he convinces her she doesn’t have to choose between career and love. But when a costly mistake puts her career in jeopardy, Sable could lose everything.

You can collect all eight (8) Naked Cowboys for just $6.93. They’ll keep you warm this winter.