Resisting the Wicked is Out Now! by @wendizwaduk #pnr #fantasy #vampires

Resisting the Wicked by Wendi Zwaduk 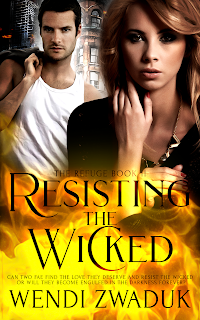 Can two Fae find the love they deserve and resist the wicked or will they become engulfed in the darkness forever?
Darkness has fallen, but it’s not the end of the world. Vampires are dangerous and the Fae are targets.
Sabra thought she’d finally run away from the vampires when she opted to hide at St. Elmo’s. No one would use her again. She’s not safe, but being a Fae, she has few options. She wants to be loved and cherished. Impossible, right?
Alyx Stevens is determined to change her mind. He knew from the moment he saw her in a vision that she was the Fae to save him. First, he had to find her. Now, he has to convince her to trust him. She’s scared, but one kiss proves she’s more than a conquest. She’s the woman he could love. But Sabra’s made enemies, and actions from her past could threaten her future…
Reader advisory: This book contains scenes of violence and death. There are references to forced sex.
General Release Date: 7th April 2020

She slipped through the doorway and into the foyer. She could breathe again. She passed into the main room, then up to the second floor. A group sat in the largest room in mid-discussion. Malachi, the wolf shifter who ran the parish, led the group.
“We can’t let the vampires govern the world,” Malachi said. “It’s not right.”
“Vampires being in charge of everything might not be right, but it’s the rule of the land,” a man she didn’t know said.
She shuddered and kept going. Vampires. The humans thought they were so great. They were considered scary, but hauntingly beautiful. Right. They’d been venerated. Jesus. The vampires had used their magnetism to convince the humans to hand over control. How beautiful were they now? The Fae King was dead, the humans were food and shifters were banned. If there were any Fae left, she didn’t know and hadn’t seen them. But everyone had initially claimed they were living their best life with the vampires in charge?
She removed her scarf and made her way to the bedrooms. Most were full, but sometimes she’d luck out. Maybe she’d even snag a few hours of sleep—if she found an empty room. She knocked on the door. “Hello?” She knocked again. “Hello?”
“It’s empty.” A girl with fiery red hair smiled, but never met her eyes. She ducked into another room.
“Thanks,” Sabra called. She turned the handle. When she entered the room, she flicked her fingers. A spark shot off her fingertips. Her heart leapt. She’d created some magic. Even if it had lasted only a moment, she’d done it. Glitter remained on her fingertips, but the more she tried to recreate the magic, nothing happened. Hope blossomed in her heart. The magic might not be dead.
She collapsed on the mattress. Part of her wanted to fiddle with the magic again and attempt to stretch her wings. The rest of her gave in to the bone-deep weariness. She needed to sleep. The vampires had used too much of her blood and if she didn’t recharge, she’d die.

Posted by Wendi Zwaduk and Megan Slayer at 12:00 AM

Congrats on your newest release! LOVE vampires. This sounds great! :)