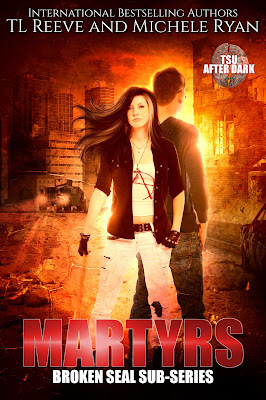 Michele and I are hard a work trying to get a couple of projects completed. One of them is Martyrs!

Martyrs is a sub-series to TSU ~ After Dark. It happens in current time, however no one in either After Dark or TSU will be affected by it.

We hope to have the first part of this trilogy available at the first of June. We will keep you posted on the timeframe.

Legend says there will be one woman who can bring about the end of the apocalypse.

Nova Blom, (pronounced bloom) carries the weight of the world upon her shoulders. As a full-time student at TSU majoring in Anthropology with a minor in Archaeology, she doesn’t have time for generational stories or prepper “end of the world,” crap. She believes in science and what cultures/society can tell humanity about the follies of their past.

Four seals have been broken.

“Low and do I see four angels and death was in the lead.”

Pest, Misery, Reaper and Murder have been released of their celestial chains by an unknown source. Their job is simple, bring chaos to the land to herald the coming of Lucifer. However, the sins of the flesh have consequences.

Nova is willing to do whatever it takes to save the world. Including, forging a pact with the devil and his four horsemen. Their time together is limited and they must find the source before the seventh seal is broken.

Can Nova trust the harbingers of the apocalypse or is it the end of the world as we know it?

“She's uncomfortable,” Misery said. “There are reasons she's not telling us.”
She jerked, surprised by the gentle edge of his usually smoky voice. “Thanks. It's a lot to unpack and I don't want to burden you with it.” Or put you on my father's shit list.
“Well, we're here if you ever want to tell us,” Pest gripped her hand.
“Thank you.” She glanced up and tilted her head to the side. “Mister-er Professor King?”
The six men surrounding her glanced up.
“Ah, students.” Professor King winked at her. “You're not doing anything I wouldn't do, are you?”
“Uh?”
He laughed. “The list is small—getting smaller every day. You’re young, enjoy it.” He pierced her with his bold, cobalt blue gaze. “Life is for living Miss Blom.”
She couldn't breathe. Her mouth went dry. Her hands trembled. Her sex ached and the proof of her arousal dampened her panties. “Right.”
“We thought we'd enjoy an evening with Nova,” Pest announced, drawing Professor King's attention from her.
“Yes, all work and no play, such as they say...” Professor King frowned. “It's good to see all of you together.” He gave Nova a lascivious look. “Remember Miss Blom, seize life by the balls.”
“I-I will,” she said, swallowing around the lump of lust forming in her throat. What was it about the man that she couldn't take her eyes off of him? Since seeing him in her biblical studies class she'd been infatuated with him. Now, with him standing in front of her, he made her ache for something forbidden. Something decadently obscene.
“Join us,” Murder grunted. “Or can the Prof, not drink with students?”
“Oh, I don't want to intrude.”
Nova wanted him to. “Please?”
“Well...” He gave her a devilish grin. “I suppose one beer won't hurt.”