Today, I would like to introduce Maggie Mae Gallagher, my alter-ego. Maggie writes Urban Fantasy, Paranormal Romance, and coming this fall she will be debuting an all new Contemporary Romance Series with the first book, The Fixer Upper, releasing September 6th, 2019.

The Mystic Series was born out of my own curiosity regarding life and death, and more important, what happens to the soul when we pass. I am someone who does believe in soul mates, and that there are those people we have traveled time with and who are the other half of us. In each of the stand-alone titles in this series it asks the questions: Would you recognize your soul mate? How would you respond knowing that you have loved the person in another lifetime? Would it scare you, or fill you with hope?

CASKET GIRL takes place in one of my favorite cities, New Orleans. Who doesn’t adore the French Quarter, it’s like Disneyland for grown-ups! My heroine is a psychic with a shop in Jackson Square and she has some preternatural talents. Her world gets turned upside down when one of her employee’s winds up slain practically on her doorstep. Casket Girl is a tale of soul mates re-uniting, murder, and suspense.

In this excerpt, Isabelle is being grilled by the hero, FBI Agent Josh Blake.

“Okay, Josh. What would you like to know?”
“I need to inform you first of your right to have an attorney present.” There was the uptight termagant for rules, law and order.
“Why would I need an attorney? You don’t think I’m a suspect, do you?” A stifled laugh caught and died in her throat. She, Isabelle Toussánt, a suspect in a murder case? Not in this lifetime. Although, by his tone she instinctively knew he wasn’t kidding, not one bit. Isabelle was rarely ever shocked. Her gift of foresight kind of gave her the 411 on what was coming, most of the time. This was a curve she hadn’t expected. What was next, the revival of the Spanish Inquisition?
He chewed over her response a moment, paying attention to her every subtle move, before answering. “That remains to be seen. If you could run me through the events this morning, please.”
Like she’d already done at least a half-dozen times for the New Orleans police, but what was one more time hashing through the gory details of a morning she’d rather be forgetting?
“I woke up early, just before dawn,” she explained, unease settling in her belly. He couldn’t really believe she was capable of something like that, could he? Her persona didn’t scream psycho killer in her book. Maybe she was a bit eclectic in her tastes, but she didn’t even kill spiders, preferring to relocate them outside.
“Is that a habit of yours?” he asked, looking up from his note-taking.
“I’m a pretty early riser, but lately I’ve been waking earlier than usual.” She couldn’t believe she’d just admitted that. She might as well have painted a sign on her forehead that read, Potential killer. Ask me how. She shook her head at the absurdity of it all.
“Any particular reason?” His pen hovered above the notepad.
How did she answer this one without sounding guilty? Because if she indicated that she’d been having bad dreams that were giving her bits of early morning insomnia, he’d want to know what they were about. She didn’t want to explain this point, not when the dreams were rooted in her past. Then she’d have to explain the beatings and abuse. The last emotion she wanted to see on his face was pity. She’d gotten out. She’d survived the trauma. And even if there were parts of her that still resonated with her past, there was nothing she could gain from telling him the truth. She’d beg forgiveness from the goddess later for her dishonesty. No good would come out of explaining this to him, there was no point. She knew she had nothing to do with Kiri’s murder.
“No,” she lied, controlling her features, understanding that he could toss her in jail for obstruction on a federal case. And then they would discover the truth, the one she’d kept buried for years regarding her identity. If it got out… A terrified tremor ran along her spine. Then he would know and he would find her. She’d rather die.

I hope you enjoy my creepy ghost tale as much as I did writing it. And be sure to check out the first book in the series Remember Me. 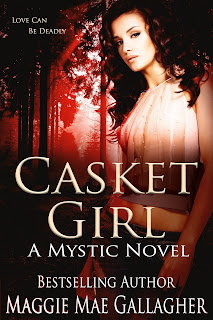 All he wants is to find a killer...

FBI Special Agent Josh Blake has seen some bizarre cases in his day. His latest case is one for the record books. He has multiple homicides, corpses drained of every ounce of blood, and no suspects. When rumors surface that the French Quarter may be hiding an insidious monster bent on drenching the streets in dead bodies, he must suspend logic and place his trust in the mystical.

She wants a fresh start...

Isabelle Toussánt left her family home in the bayou five year ago, cutting all ties with her abusive whiskey swilling stepfather, to forge a new life in the French Quarter. Now a successful business owner of Madam Toussánt’s Mystical Gifts in Jackson Square, and a Seer with voodoo roots. The foundation of her new life shatters when one of her employee’s winds up dead and she is dragged into a deadly game where she becomes the target of a serial killer.

A passion neither expected...

Determined to stop the brutal slayings, Josh must rely on the beautiful Isabelle who makes him question everything he has ever known about life and death all while surrendering to a desire hotter than a Bayou night. When Isabelle disappears without a trace, with tourists flocking to the party capital for Halloween, and the body count continues to mount, Josh will be forced to push beyond the boundaries of what he thinks is possible and rescue the woman he loves before it's too late.
Available for FREE with #KindleUnlimited on Amazon

Other Titles from Maggie Mae Gallagher Available on Kindle Unlimited

I love urban fantasy. This sounds like a terrific story! :)