Dominic and I took our honeymoon in Germany 23 years ago, so when I decided to write this story, I used a lot of the places that he and I visited together.  They are so special to the two of us and I really wanted to bring you there as my couple noticed each other and opened themselves up to love. 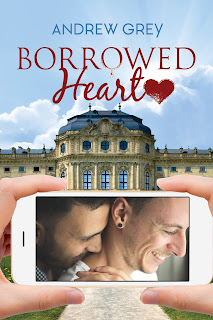 
Robin, the recipient of a brand-new heart, knows he can’t give it to just anyone….


Robin’s been through his share of upsets recently, from heart transplant surgery to a brutal breakup. But his experiences have taught him life is short, and he’s ready to seize the day and start anew. A job at Euro Pride Tours is just the kind of adventure he’s looking for. He gets to see the world and live a little, but love isn’t on his radar screen. He isn’t sure his heart can endure that again.


Johan might’ve disappointed his family by striking out on his own, but when he meets Robin, he has no intention of letting him down. Each man is just what the other needs to feel whole again, and while Johan might not be the man Robin originally thought he was, he’s exactly what the doctor ordered to make Robin’s borrowed heart beat faster. As the tour through Germany progresses, they grow closer, but when Robin’s ex joins the tour, he could bring their blossoming love to a dramatic halt.

After dinner, the group had taken a night tour of the town. Most of them had settled in a small café near the town center for coffee and dessert. Robin made sure they knew their way back to the hotel and then went back himself. He needed to try to get some sleep.


He unlocked the room and stepped in, just as Johan came out of the bathroom, a small towel around his waist that barely covered his bits and butt, leaving strong legs and sexy abs exposed to Robin’s hungry gaze. He turned away and went right to his bag, busying himself as Johan moved behind him, hopefully dressing.


“Are you going out?” Johan asked.


“No. Most of the group found a café. Billy and Kyle went off to find some nightlife.” Robin carefully sat on the cot, relieved when it didn’t collapse, though it definitely groaned. “I’m going to go over the things for tomorrow.”


Johan rolled his eyes, and Robin got up the courage to actually look up at him. Johan had pulled on a pair of jeans, but he was still bare-chested, and the temperature in the small room spiked at least ten degrees. A visual feast of golden skin, lean muscle by no means muscle-bound, and a dusting of dark hair sent Robin’s pulse racing. He turned away again, because lusting after his coworker was so damn wrong on so many levels.


Robin’s brown curls—his mom called them shaggy—fell into his eyes, and he used them as cover to look a little more. Johan walked closer to the window, his belly at perfect eye level, a dark trail slipping into his pants, leading to… well, Robin’s imagination could certainly fill in any gaps, and it did in spectacular fashion.


“Maybe I will go out,” Robin said softly. Lord knew if Johan stayed in the room, especially like that, Robin wasn’t going to be able to breathe. Robin grabbed his messenger bag and hurried to the door, almost forgetting his key, before leaving the room and hurrying down the hall to the stairs.


Outside on the cobbled street, Robin took a deep breath and slowly walked toward town. There was a small convenience-type store a few blocks away, and it would be good if he got some more water and a few snacks.


Robin gritted his teeth and turned to find Johan striding toward him.


“You didn’t have to leave the room so quickly.” He fell into step with him.


“I’m Robin, not Robbie,” he said firmly. He hated that nickname.


“Okay. You still didn’t have to leave.” Johan looked at him with his big, almost-mysterious brown eyes for long enough that Robin felt heat rising at the base of his spine. “Are you one of those prudish Americans who keeps himself covered all the time?”


“I’m not prudish,” Robin said. “I just needed some fresh air and to get a few things.” He continued on his way, doing his best to keep his attention on the way ahead and not on Johan’s hotness.


“Do you not like guys? Is that it? You work for a gay tour company.” Johan walked faster as Robin sped up. He hadn’t meant to, but his legs just kept moving more quickly. “Maybe you’re one of those people who doesn’t like to be happy or something.”


Robin came to an abrupt stop, opening his mouth to give Johan a tongue lashing, but he realized he was standing in front of the café where half his tour group sat, watching them. Well, they were watching Johan. No one ever paid that much attention to him.


Robin whirled on his heels and continued toward town. How dare Johan try to get into his head. “For your information, yes, I like guys, and I’m not a prude. Though you seem to have exhibitionist tendencies. Is what you’ve got really worth making sure everyone sees it?” He turned to Johan and cocked his eyebrow.


Johan smiled and didn’t retort, which pissed Robin off a little more and actually raised his curiosity level. Damn it all to hell. Why was he doing this to himself? They had a job to do. 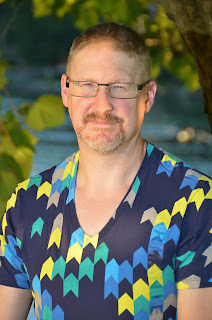 
Andrew’s hobbies include collecting antiques, gardening, and leaving his dirty dishes anywhere but in the sink (particularly when writing)  He considers himself blessed with an accepting family, fantastic friends, and the world’s most supportive and loving partner. Andrew currently lives in beautiful, historic Carlisle, Pennsylvania.

Congrats on your newest release, Andrew. Sounds great - and the cover is awesome. :)