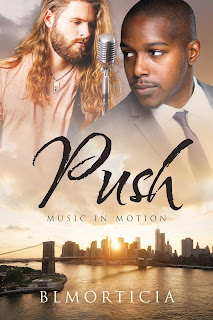 As an author, many things inspire us. Whether it’s something a friend told us or things we encounter in everyday. Perhaps there’s something on the internet or on social media that pushes us to write a book about it. Anything that might get the ideas flowing in the right direction.

For Push, I thought about giving the rockstar romance trope a different angle. Why not the ultimate opposites attract of a rocker and rapper? From my short time publishing MM Romance, I haven’t seen this idea presented. It might be because of the hip-hop scenes violent history or authors don’t wish to tackle it because it’s a genre that essentially came from the black community. While all these are possibilities, this muse and her twin sister Michael, don’t give a damn. BL wanted to write a story and said, “yeah so, Sharita, I know you don’t even listen to hiphop but WE GOTTA WRITE THIS STORY!”

Being a fan of bringing opposites together, of course I listened. This was truly a new concept and I certainly hope other authors of rockstar romances will follow. Despite having limited knowledge of the hip-hop genre, I did a little research. I wished for Malakei, the rapper, to be a mogul like Sean Puffy Combs or whatever he calls himself these days. I also wished to make Malakei respectable, wealthy, and mostly drama free.

Although I’ve made Seth a Brummie (from Birmingham) he was easy. I’m a heavy music fan, so I applied all I’d learned into him and did a little research where I needed. For both characters I watched videos on YouTube, I asked friends, and one of the editors was very helpful with certain things about Seth.

At the end of that, I had an awesome story. I couldn’t be more proud. The tension between them is evident from the first page. The attraction, Seth being sort of a hard ass but having a massive crush on Malakei. And then there’s Malakei who is still closeted to the world. This made for an exciting book and I’ve been bursting at the seams to share it with the MMRomancelandia.

If you decide to give it a try, I hope you enjoy it!

Seth and Malakei meet for the first time


Malakei had gotten a text from Lena that she’d be coming in with High Stakes and family soon. He could barely hold in his excitement about seeing Seth Davies up close. Dang.
“Focus, M.” Malakei mentally checked himself and stood up when he heard the door open. He had to keep this as business because he wasn’t sure what to expect. However, Malakei had a hard time, knowing the fine guitarist was only feet away from his grasp.
“Malakei? We’re here.”
Malakei took another deep breath, then stood up. Making his way toward them, he glanced at everyone who appeared to be starstruck.
“Hello there. High Stakes and family, I presume. It’s so good to meet you.”
Lena cleared her throat. “Um, Malakei, from the left is Morty, the bassist, his girlfriend, Gina. Gio, and his mother, Theresa, and Seth along with his mother, Ethel.”
All of them said hi, and Malakei made sure he started with Morty, before greeting Seth and his mother. He kissed all the ladies’ hands and shook the band members’ hands as a gentlemanly display. The women blushed, apparently in awe.
Though Malakei didn’t spend that much time holding Seth’s hand, the feel of it wasn’t lost on him. As expected, it was rough, calloused, prickly around the tips from playing his guitar without a pick or even tape. He was a hard rocker through and through, not concerned with protecting the skin. Seth exuded rock and roll because in the minds of people like him, hard music meant sacrifice.
Other than the texture of Seth’s palms, Malakei couldn’t help but notice the outfit. Seth wore black jeans again and this time a classic Metallica T-shirt. Both hugged his lanky body like a glove, and as with most metal musicians he’d known of, they didn’t care for heavy coats. Seth wore a small leather jacket full of buttons on both lapels. Yes, he looked every bit of the part of the quintessential metalhead.
“Gods, you are even more handsome in person.” Ethel smiled at him.
“Um, thank you.” He chuckled. “And you, young lady have a very talented son. Along with his friends, I think we could help them be something special.” Malakei tried keeping his tone even. Out the corner of his eye, he could see Seth was actually at a loss for words.
“Um, yeah, Malakei,” Seth said. He held out his hand again and bowed his head slightly. “Thanks again for this opportunity. I’m totally gobsmacked you’ve asked us to play for you.”
Malakei accepted it again and gripped it firmly. “No, it is my honor. Can we offer you all something to drink? Coffee, tea, water, or soda?”
“Water for me, thank you.” Ethel spoke up first.
“Same with me,” Gina said, as did Gio’s mother.
“I’ll take soda,” Morty said.
“Me too,” added Gio.
Seth grinned at Malakei again. “Do you mind if I be different and ask for coffee? I’m a little drained and need to wake up.”
Malakei wished to follow that up with a snide remark, but he kept it to himself. “Of course. Lena, please grab refreshments while I show the ladies and gentlemen around the studio.”
Lena smiled at Malakei and walked out.

BLMorticia entertains her readers with hot and smexy sex, humor, and lots of swear words. She attempts to incorporate metal music or the military in most of her works. Nothin’ sexier than metalheads or military servicemen and women!

Romance and erotica author Sharita Lira believes that love conquers all. Writing sexy stories of people who might be complete opposites, but somehow make a lasting connection that often leads to a happily ever after.

Happily married and mother of two, Sharita never allows complex plots to deter her from writing the story. Inspired by heavy music, attractive people she’s seen in person and on the internet, Sharita always has a tale on her brain.

In addition to being a computer geek and a metalhead, Sharita loves live music, reading, and spending time with family and friends. She’s also a founding member and contributor to the heavy metal ezine FourteenG.

For more information, please visit http://www.thelitriad.com and if you’re a fan who would like exclusive updates on her writings and chances to win prizes, sign up for the newsletter!