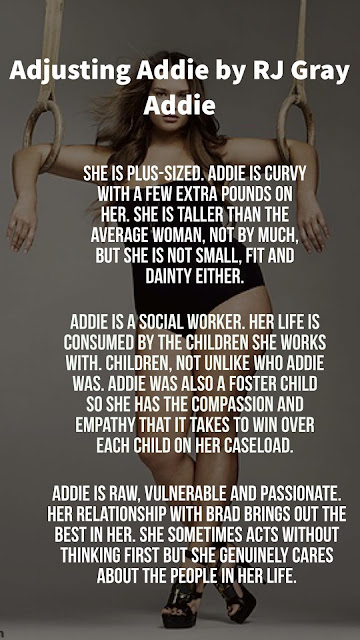 She is a feisty social worker. He is an accomplished chiropractor. Her life needs an adjustment, and he’s just the man to do it.

Addisyn “Addie” Gabriel always knew she needed an alpha male to take her in hand. Former Marine Special Forces Operator turned chiropractor, Doctor Bradley Murphy, is that and so much more. Addie soon discovers that happiness lies with following the doctor's orders.

Publisher's Note: This action-packed romance contains graphic scenes as well as power exchange themes. Please do not read it if this offends you. 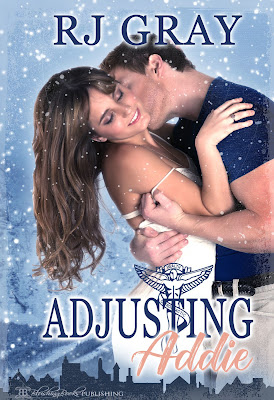 1.)   “Addie looked up at Brad then and saw that he was sitting in his large desk chair. His broad jean-clad legs were spread evenly apart. His white dress shirtsleeves were rolled right above his elbow, unbuttoned as the cuff couldn't fit over his muscles, otherwise. She didn't know when he had taken off his tie, but he had. It was lying neatly on his desk. She looked into his green eyes and knew she was safe. It was a conflicting emotion, feeling safe with a man who was about to spank her, but it was there—safety. It was a calming realization, although nothing in her was calm as she took the steps toward him, toward her man and the deflowering of her butt.

He settled her until she was standing between his legs and looked up at her. "Good girl. I'm proud of you for making the right decision."

The words cut into her heart, carving away at some of the stone wall she had spent years building.
"Have you ever been spanked, Addie girl?" She shook her head no. "When we are here like this and you are going to be disciplined, I expect you to respond. You will answer me with respect. The phrase you are looking for is, 'No, Sir'. Have you ever been spanked before, Addie girl?"

"Good girl." She could get used to those beautiful words falling from his lips. 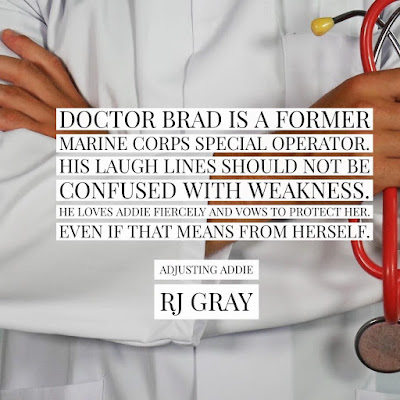 2.)   Addie didn't know how much she needed the spanking. As each swat fell, she slowly gave over to it—the rhythm and the pain, the lack of control, the unwinding of the knots in her stomach, knots she forgot were there. The spanking hurt; it really hurt. Each swat that fell was another burning sensation. The sound of the swats didn't just resound in the room but also deep within Addie. She was able to release all the pent-up emotion, lying there over Brad's lap, by allowing her capable man to take charge of the situation and of her behavior. She felt safe, and she felt loved. There was a sense of calmness that fell over her with that realization. Her bottom was being set off like firecrackers on the Fourth of July, but she was calm in the knowledge that she was safe and he would never do anything to cause true harm to her person.

3.)   "Come for me, baby girl," Brad growled out as he thrust roughly, flexing his hips upward and hitting her G-spot with just the right amount of pressure. The raw, primal growl in his voice, along with the owning of her body, made Addie come undone. The orgasm washed over her body, vibrating and shaking it as her cries of pleasure filled the room. It was the first time in decades that Addie had felt beautiful.

RJ Gray started writing at the age of five when she won her elementary school’s story contest. Her writing has evolved from short stories about unicorns to books about dominant alpha males and feisty, stubborn females. RJ holds college degrees in both social work and criminology, topics that can often be found in her novels. She has spent the past fifteen years as the wife of an Army bomb technician and as such, she has a passion for military and veteran causes. RJ lives in Virginia with her husband, two young sons and their recently rescued beagle-lab puppy.

RJ loves hearing from her readers. You can email her at AuthorRJGray@gmail.com She is quite the social butterfly and you can find her on the internet on her Facebook Page, Amazon,Instagram, Bookbub, GoodReads and Twitter. Another way to keep up with her is by subscribing to her newsletter.

Redrabbitt
TOP 1000 REVIEWER
5.0 out of 5 starsADDIE AND BRAD
March 22, 2019
Wow, what an amazing, page-turning story that held me spellbound as it unfolds, with a great cast of characters, plenty of mystery, suspense, angst, and adventure. The chemistry between Brad and Addie is explosive from the beginning, and the more time they spend together, the more intense it becomes.Addie is a social caseworker, was in the foster system as a child, and has so much compassion and understanding for the people, especially the children involved. She doesn’t have the best self-esteem, has a curvy body, is overweight, and has joined the YMCA fitness to work out and lose weight.Chiropractor Brad Murphy works out each day at the YMCA and has been watching Addie, overhearing conversations, and becomes concerned when she nearly passes out in the cardio room because of overdoing it. This will be the beginning of their relationship, which starts off rocky but will smooth out.The plot will have Addie uncomfortable with one of her cases and the man who will have supervised visits with his daughter. The little girl is uneasy with him, and it just sets off alarm bells with Addie. But then other things start happening, things coming up missing at home, and Addie thinks she is just misplacing things. When Mr. Whitehall makes some startling statements, it will scare Addie, but luckily Brad will show up to the rescue—but he isn’t a happy man. This is the catalyst for the rest of the story that is suspenseful, edge-of-your-seat action.Brad and Addie’s relationship will go from friends to a couple who include domestic discipline when he overhears her putting herself down again. Once their relationship changes, it will come with agreed-upon rules. When Brad worries about her safety and learns some things that have happened, he is upset with her for not telling him—but they talk things out, and he just wants to keep her safe.The story makes you think about being aware of what goes on around you. It does have a stalker who is spying of Addie and takes on a life and death threat and situation. It is also a story of two people who fall in love and make a commitment to live a D/s relationship with discipline. I liked that it brings out that there are different types of spankings, and they aren’t all punishment, sometimes they are for stress release, and sometimes they are for pleasure. There are also mildly explicit sex scenes.“I love you, Addie girl. I want to be your everything, your partner and your confidant. Don’t worry about me leaving you; I’m here to stay.”

This sounds like a great story and I LOVE the title! :)