When I write, I tend to like nothing bothering me. I like noise and will listen to a podcast, movie or music while I'm writing. But lately I've developed a new affliction. A pup on my lap. I keep treats in the pouch of my sweatshirt for when she does something good or deserves praise. They aren't big treats, but they're there. She figured out where they are. Now how can you say no to this face? 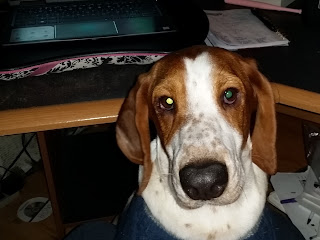 You can when there's a smexin' scene to write and you need to get it done. But I'll admit I've taken more than a few pup breaks. :-)

While you're here and reading about me writing with a dog encroaching on my space, check out my latest release, Bed of My Truck.

Bed of My Truck by Megan Slayer 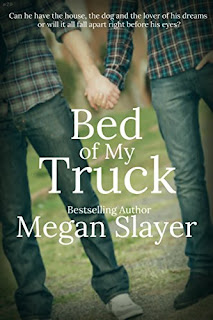 Can he have the house, the dog and the lover of his dreams or will it all fall apart right before his eyes?
The one Carson never thought he’d see again could be the one to save his life.
Carson never expected to see his dog or a man from his past ever again. His ex took Dragon when he left, then carelessly lost the dog.  Dragon’s been found and in the last place Carson expected to find him—a vet’s office.
But, the surprises just keep coming.
Carson hasn’t seen Alec since school, but the feelings he had for the man haven’t abated. When he’s reunited with Alec at the veterinary office, Carson’s got to face his feelings.
Includes scenes of spanking, oral sex, anal sex and male-male sex.

This book has been re-edited and re-issued in this edition.

Excerpt:
©2017, Megan Slayer, All Rights Reserved
“I never got a chance to give you his rundown.” Alec grinned. “Since the waiting room is empty, I’ll just tell you now. No worms, no fleas, but I’d give him a bath. The weight loss helped but I’d also suggest getting Dragon on a tooth brushing regimen. He’s been eating things he probably shouldn’t that did a number on his gums. I ran a heartworm test which was negative and I’ve given him a pill for this month. When you come in next we’ll set you up right. Call, okay?” He winked and walked back into the closest exam room.
We’ll set me up? Call? He wanted me to call him? I hadn’t heard those terms in such a long time. Maybe my assumption more than fifteen years before had been more on the money than I thought. I shrugged him off back then. I could be over-thinking. Again.
I looked down at Dragon, who was sprawled on his side on the floor.  He gazed up at me with his droopy eyes and his tongue sticking out of his mouth. At least I had him back. What I’d do about my overzealous crush on the vet and his advances, well I hadn’t figured that out yet. I stress yet.

Posted by Wendi Zwaduk and Megan Slayer at 12:30 AM

Aw, your fur baby is adorable. My cat loves to sprawl on the keyboard when I'm writing. She simply can't stand it when I'm showing interest in anything but her. :)

I envy you for being able to write with noise around. I need quiet and that's not easy to get in today's world.