"FATE" The Angel Pack 14
Went straight to #1 for over a week.
Now available on bookstrand: http://www.bookstrand.com/book/fate 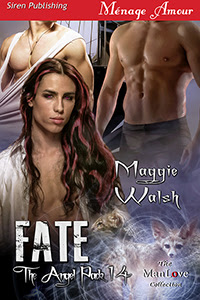 The Angel Pack Saga continues in book 14, the highly anticipated release is finally here!
One of the packs most endearing characters finally gets his story.
Castiel Angel gave up his mate to save those he loves. Then two strangers, Shay and Kia, show up, bringing unique powers to the Angel Pack that can help them, as well as put Cass’s dark past to rest.
While on a mission from the council, fae warrior Sasha comes across a disturbing discovery. In the midst of the horror, he finds a small, terrified man that is the spitting image of one of the packs inner family.
Kia uses his powers to explore Cass’s past, and dark secrets are revealed. Raffy decides to take matters into his own hands and hunt down the brother who died so long ago, and make him pay for the evil he has done. But the pits of hell are no place for someone so pure of heart.
Will they be able to find Raffy before the demons of hell swallow him up? And can Cass ever move on from his own demons and grab onto his future...with his mates?

Come see what all the buzz is about from this Bestselling, Award Winning Series. The Angel Men will welcome you in for adventure, drama, hi jinks, and plenty of romance as they try to fight evil forces trying to take over the world.
"Everyone who enters here comes as a guest, and leaves as family." -Alpha Micah Angel
To see what Maggie is up to, what's coming next, or to see the order of the Angel Pack series, here are her links:
Facebook: https://www.facebook.com/profile.php?id=100014217014397
Twitter: https://twitter.com/maggiewalsh68
Pinterest: https://www.pinterest.com/maggiewalsh68/
Website: http://maggiewalshauthor.weebly.com/
Siren author page: http://www.bookstrand.com/maggie-walsh
Amazon author page: http://www.amazon.com/Maggie-Walsh/e/B00NB8YAGS/ref=sr_ntt_srch_lnk_1?qid=1426884194&sr=8-1
e-mail: maggiewalsh68@yahoo.com
Posted by Maggie Walsh at 12:00 AM

Congrats on being #1, Maggie! Well deserved. :)