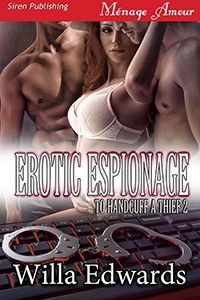 Two weeks ago my newest release became available. The second in my To Handcuff A Thief series. I've been working on this book off and on for almost a year and it feels so good to finally have it completed and available for the world. This book was truly a labor of love. If I didn't love these characters I would have walked away from it a long time ago. But I love McKenna, Chris and Sawyer too much to leave them behind with only one book. I hope the readers feel the same.

Here's a little taste for your reading pleasure...

Two months after meeting Sawyer Hamilton and Chris Brewer, McKenna James and her two men are thick as thieves. Well, one thief and two sexy engineers. United in great sex and their continued battle against Texichron, the company that sent McKenna to steal their plans for a waste-less oil refinery.Sawyer and Chris aren't strangers to protecting what's theirs. And that now includes McKenna. If that means they have to spend their nights in a crappy motel and their days watching over her on security cameras, they'll do anything to insure her safety. Whether she wants it or not.
McKenna has never had a partner. Then again, she'd never met anyone like Chris and Sawyer before. Having Chris and Sawyer watch her back is more fun than she anticipated. And when things go downhill, they stick around. But getting used to that is a dangerous proposition.
One she isn't sure she can accept.
Excerpt

Without another warning, he yanked his fingers out of her. She gasped at the withdrawal. She only had a moment to process the sensation before Sawyer’s slippery fingers skimmed upward to explore her ass.

Automatically she flinched beneath the touch. It wasn’t new. Sawyer and Chris had been playing with her ass a lot. Their intentions of taking her together were known. Yet the sensation always shocked her—at first.

Sawyer anticipated her jerking and strengthened his hold around her waist, keeping her in place as he explored her. He caressed her ultrasensitive flesh until her whole body shook. When a tiny moan leaked from her lips, he slipped two fingers inside her.

She panted through the invasion, the fullness of his fingers sending sparks through her system. Her pussy gushed at the touch. An ache settled deep inside her, gnawing at her insides, desperate for more.

He moved his fingers, nudging them in and out. Each small movement increased the burn. She wiggled on his lap the best she could beneath his hold, unsure if she wanted to wriggle away from the touch or force him into her farther.

“What do you think, sweetheart? Will that teach you?” Chris brushed the hair back from her face and behind her ear.

She didn’t know exactly what this was supposed to teach her. She’d forgotten the lesson around the time Sawyer pushed his fingers into her pussy. With his fingers now in her ass, she could hardly remember her name.

“I doubt it,” Sawyer grumbled above her, his voice rusty. “Not our little thief. She never learns her lesson.”

She bit back her own retort. She learned her lessons—when they mattered. But this was far from a deterrent. And they both knew it.

She considered telling Sawyer just that, even though it would only cause him to remove those fingers for another swat. It was just too tempting to poke at him, like a bear in a cage, to see how far she could push him before he snapped.

But before she could say a word, he pushed his fingers deeper, stealing the breath right from her lungs. A moan ripped from her throat. The pinch of his fingers pushing in and out of her tingled along her nerves, vibrating out to the tips of her toes and the top of her head.

She groaned beneath their sexy words and the continued thrusting of Sawyer’s fingers. Her head swam. It was all too much. She didn’t have any choice but to lean into the sensation, placing herself in their capable hands. Trust didn’t come easy to her, but Sawyer and Chris had earned it from the first day she’d met them.

Sawyer twisted his fingers inside her, brushing his thumb along her slit. The soft caress sent shivers through her entire body. Wetness dripped from her, coating his fingers. Even her own body conspired against her. As much as her mind wanted to play with them, her body was always an easier mark.

“What do you think, buddy? Are you up for filling this naughty thief?” Sawyer brushed her clit. She sucked in a deep breath at the touch, the heat zipping through her blood.

She glanced up at Chris, loving the need in his chocolate eyes. A muscle in his jaw twitched, detailing how forcefully he held himself back. The right caress would be enough to push him over the edge. “Absolutely.”

It took him only a second to maneuver out from beneath her. With desperate fingers, he ripped apart his fly to pull his already hard cock from his pants. Thick and ruddy, his dick throbbed before her.

Chris shifted on the bed, positioning his groin in line with her mouth. “What do you think, sweetheart? Ready for a little more?”

She licked her lips, loving the way his eyes darkened with the action. “I wouldn’t call it little.”

Both men laughed. “I appreciate that, sweetheart. But I can think of a much better way to show your appreciation.” His voice took on a deep rasp on the last few words, setting her heart pounding.

“Don’t play with us, McKenna.” Sawyer tightened his free hand around her nape, directing her attention. “You know what he wants. Now get to it.” He released his hold only to smack her ass again. The muscles contracted around the fingers still in her ass in reaction. The stretch stole through her, stealing her breath away. The heat that followed threatened to incinerate her, and she didn’t care. She only wanted more. Enough to push her off the edge and into the pure bliss she knew existed on the other side.

But first she had a task to complete.

With the tip of her finger, she traced the soft skin across Chris’s cock. His stomach muscles fluttered from the brief touch. His breathing picked up speed, his chest rumbling with each deep gust. His eyes focused on her, never leaving her face. His expression was so honest and needy her heart skipped a beat.

“That looks real nice, baby.” Sawyer moved his fingers in and out of her in tiny increments. Not enough to satisfy her, but enough to drive her completely insane. Which was his intention. “But that’s not exactly what we had in mind. Give him a taste of your talented mouth.”

Congrats on your newest release, Willa. I really enjoyed the excerpt. Here's to you burning up the net with your sales. :)