It’s a New Year and it’s time for New Year’s Resolutions. I don’t think of myself as someone who makes resolutions, though I guess I do, but I think of them more as goals. Most resolutions are vague, like lose weight or get healthier. While goals are more concrete. You usually set a goal to do something specific by a specific point in time, like I want to lose twenty pounds by my daughter’s wedding or that beach vacation. Working with numbers and statistics all day long in at my evil day job I like to come up with defined trackable goals. I’m a nerd, I know, but being able to track my progress keeps me motivated towards all the dreams I want to achieve.

I haven’t come up with my resolutions for the year yet. I tend to decide on my goals for the year in late January or early February, after I’ve had lots of time to think about them. It also makes it a lot easier to not abandon them by January 15th like the average American :). But this year I do have one resolution that is rather vague. I want to work more on my series.

Ever since I’ve started writing I can’t help but come up with series. My very first published book was the beginning of a series I completed just this year. I can’t tell you how many stories I’ve sat down to write as a standalone story and somehow I end up with three or four books out of it. Wandering off the Path was that way, so was Owned for Christmas (which I’m currently revising the sequel for). I even written and published a sequel to a short story this last year (Serving Madame: Monsieur’s Turn). I feel it’s a marked achievement that I was able to write and publish a standalone story that I have no intention of writing a sequel to (Valentine Next Door) in 2014.

But as much as I’m good at coming up with series, I need to improve on not being distracted from my series. I definitely have shiny new idea syndrome and usually those shiny ideas become series too, filling my head with all kinds of new stories waiting to be told, and making it even harder to get back to the series I’ve already started.

So this year I want to focus on finishing and fleshing out a few of my series. Right now I have two in progress, but plenty more in thought or beginning draft. This year I want to start completing, move forwarding or bringing to publication a few of those series. How many, I’m not sure (which is why this goal isn’t so trackable) but I definitely want to make it the focus of my writing year.

I’m starting 2015 off with a bang towards this resolution with my newest release, Second Chance at a Cheerleader, out today with Siren Publishing. Yippee! This is the second book in my Snowedin Fantasy series about the kinkiest ski town you’ve ever been to…or at least read about. I’ll definitely be working to add to this series through the course of the year. I already have books three and four plotted out and a ton of other stories ideas wandering around town. Now I just have to make the time to write them all.

I hope you’ll take a look at this book and series. I can definitely promise the stories will keep you warm, even in Snowedin. 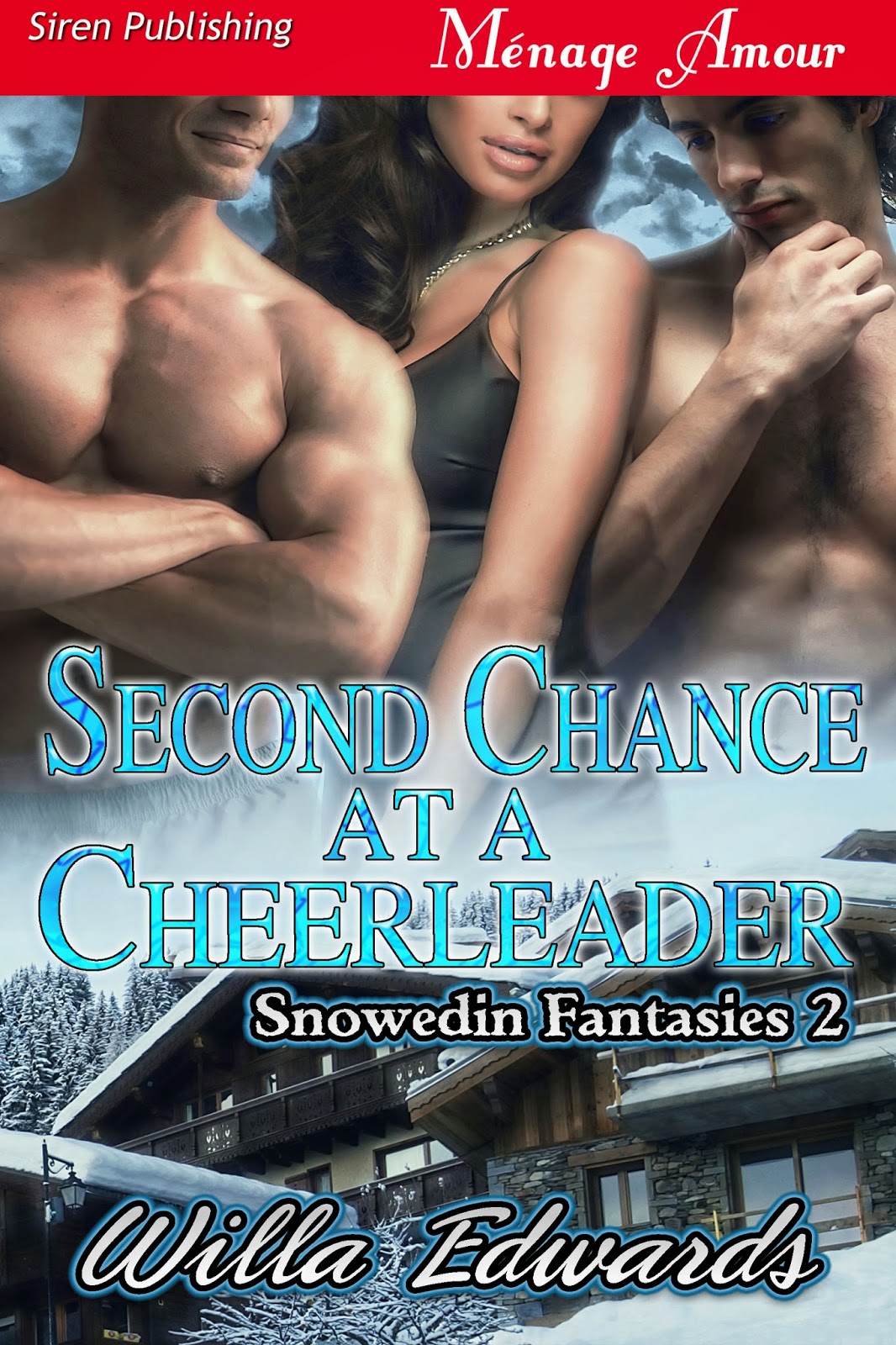 Dan Tyson and Matt Goodman are the ultimate nerds, not to mention millionaires, after their video game hit it big. They always dream of loving one woman, Lanie Brookes, queen of the school. But back in high school they couldn't interest any woman. Definitely not someone as amazing as Lanie. As their high school reunion approaches they decide to blow off some steam, by sharing a date from Fantasies Fulfilled.
In high school, Lanie Brookes had the life everyone dreamed of. She was head cheerleader, dating the captain of the hockey team. But since staying in Snowedin to take care of her mother, her life has gone downhill.
When she receives a mysterious subscription to Fantasies Fulfilled, she decides to make the most of it, picking two men for the price of one. But she never guessed she’d selected the two men she's dreamed of since graduation night, Matt and Dan. But will they still be interested in her now? Or will the fantasy go up in smoke when they realize who she's become?
Posted by Willa Edwards at 3:00 AM

Second Chance at a Cheerleader sounds so hot, Willa - can't wait to read. Can you show us a cover? Please?

Thanks Tina. This story definitely is hot. With my favorite, nerdy heroes.

You're right I should have put on the cover. Its a good one to. Can I add it now?

Hi Willa. I wish you luck on your resolutions. I've reached the point where I have given up. I guess I know the sloth beneath the skin well enough to understand I can barely keep with the day-to-day demands of living life to the full, at least as my lazy self defines it. I remember having endless energy once ... long ago. Now not so much. A professor once told me I'd know when I reached "the age of relaxation." I think I'm there. It's that age when you quit making resolutions.

BTW, I enjoyed the synopsis of your new book. Sounds devilish. I wish you great success with it.

Love the premise of this book. Lots of luck with it for a smashing success!

The only resolution my family encouraged me to make for this year involves relaxing more. For me, since I have to work as many paying jobs as I can, it means that promoting is going to have to get short shrift, at least for now. I'm not one of those authors who can pay bills with royalties checks. Hell, even a cup of coffee's worth would be great now and then. Either I'm just not any good at writing, or I need to do a lot more work to reach my audience. But with only the same 24 hours to each day that everyone else has, I'm not going to be able to sleep, let alone interact with my loved ones, unless I give up some of the time-sucking activities I've been doing...with little to show for it, apparently.

But even so, when husband wants me to watch TV with him, I crochet afghans for family and friends, so at least I don't feel like I'm "wasting" my time. He laughs at me, says I need to learn to totally relax. I'm not sure what the word means, I guess.

It's easy to get a bit discouraged, Fiona. I'm not sure how to make a
"breakthrough" either. My sales suck, but I keep at it. The only reason for an author to write is because he/she loves to write. I don't see much money in it. A few authors make it, but they are the rarity.