This novel began several years ago, written originally as a script for a television series. That show has long since been cancelled, but the idea never left me. So, I combined the original book with a new idea that dove-tailed nicely, and this book was born of that merger. The reader testimonials humbled me when it was first published, and when I terminated my contracts with the first publisher, I hated to see this novel go from my catalogue. Fortunately, it wasn't for long. The novel is back, with a stunning new Kayden McLeod cover, and will be available in print again, as well, very soon. Take a look at this newest release, and if you like a mystery with a paranormal twist, I think you'll love this one! 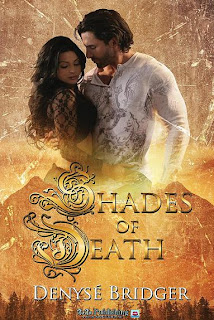 Death has many shades and shapes... Deep within the ageless , an ancient evil wakes. Imprisoned many centuries ago, the creature has waited, patiently, for the one destined to grant her freedom. Arienne Lereaux has studied the preternatural menace called "vampyre" for most of her life. She is an expert in the field. Loosely affiliated with a secretive organization called The Institute of Paranormal Research and Investigation, she turns to them when she unearths what may be the first representation of the vampyre ever to exist.

The enigmatic and attractive Head of the Institute, Adam Raven, has spent a lifetime tracking the clues left by his mother's disappearance in the mountains of nearly twenty years past. When Arienne arrives at the secluded island headquarters of the Institute, he wonders if she holds the key to finding his lost mother. But before too many days pass, the city of is rocked by a series of grisly murders. As it races to find the culprit, the Institute faces an evil unlike any it has encountered before...

In the middle of their hunt, another branch of their network is making a scientific breakthrough in genetically heightened telepathy. The team responsible may soon hold a weapon that will have world powers at their door—until their lead scientist vanishes after leaving to consult Raven and his people. Ancient myth is suddenly not myth, and evil may take many guises before the Institute can restore the delicate balance that was destroyed the night Arienne stumbled into a remote castle in the mountains half a world away…

“It’s incredible,” Adam breathed as he ran a reverent hand across the ancient tome.

“It’s supposed to contain the history of vampyres, in all their guises and species,” Arienne informed him, her gaze vaguely uneasy as she stared at the aged hide bindings of the book. Drawing in a deep draught of air, she steeled herself for the shock that always accompanied opening the ancient volume. Her fingers shook imperceptibly as she raised the cover and placed it back against the smooth surface of the conference table.

A sharp, piercing pain lanced her chest and she clenched her teeth while she waited for it to lessen into something bearable. Adam’s hand on her arm made her flinch, a response she softened an instant later when she smiled and nodded reassurance.

“There is a strong spirit within the book,” she whispered, unaware of the lilting rasp of her voice. “It strikes, almost physically, each time I open these pages.”

Adam nodded, then smoothed his fingers over the yellowed parchment. The Raven family signet ring that adorned his left hand glowed for a split-second, creating a flare of fleeting fire. Arienne’s dark eyes widened, but she said nothing.

“The language is a mystery,” Arienne murmured. “I have been attempting a translation for months.” She touched his hand, her fingers a bare breath of contact on his flesh when she traced warm skin and the veins that pulsed beneath its surface. “I want your help, Adam,” she stated. “To translate the book.”

Adam smiled and lifted her fingers to his lips, the kiss a whisper of touch.

“Derek Knight is the our master of cryptography,” he told her. “We should see if he can be lured from the S.I.G.H.T. project long enough to offer his expertise.”

“I’ll show you the basics of the prospectus later,” he promised. “In the meantime, I’d be happy to help,” he assured her. “But, I do feel Derek’s talents would be of more use to you.”

“Do you think we’ll find what I’ve been looking for, Adam?” she enquired, her tone layered with a multitude of resonances.

“We may find things that answer questions we’ve not yet thought to ask,” he surmised. “Especially if this book is what you believe it to be.”

“Professor Knight’s help would be welcome,” she smiled, then walked to the window.

Adam left the room, and she smiled. Again, the blaze of red fire sparked back from her reflection, and the voice that murmured into the silence was not Arienne’s.

Whispers passed between the two people who flitted through the lugubrious gloom, headed toward a secluded sanctuary deep within the confines of the park.

The woman laughed softly, tone seductive and enticing. She held out her hands and her smile invited. The man grinned, stepped into her embrace.

“Cecilia,” he murmured quietly, once they were safely hidden in the darkness of the gloom. He kissed her, long and intimately, enjoying her enthusiastic response. She encouraged his caresses, guided his willing hands over her curves.

Confusion colored her breathless voice, and her eyes glazed as she sought the source of a sudden, inexplicable terror. The moment passed in the space of heartbeats, and the phantom that trailed them drew near.

He sputtered once... without seeing the distortion of the face of his would-be lover. He died, twisted into her grasp as her form merged with his.

Long minutes later, she dropped the lifeless husk of his body and leaned back against the side of the building. Her breathing was ragged, still rough with excitement. She laughed, and ran.

The nearby woods acted as shelter, then witness to the second destruction... 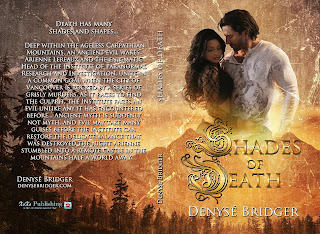 Posted by Denysé Bridger at 6:30 AM

What a great premise, Denyse - the blurb is so intriguing. And wow - the cover - just awesome!! :)

Thanks, Tina - another Kayden McLeod masterpiece - she is totally amazing!! Everyone's who's read this book seems to like it, I probably should read it myself someday... :)

Hello, Sue!! Thank you. You're entered to win a copy. Appreciate you stopping by, as always. *hugs*

Intriquing and quite different excerpt. Chilling and gripping.

Thank you, Jean. When I first wrote this, a friend who is one of Canada's leading vampire/dark fantasy authors told me to get it published because she'd never seen the genre approached or written this way, so I took her advice. It really isn't a typical vampire novel in any way.

Jean - drop me a quick Email and I'll send you a copy of Shades of Death.

Thank you, everyone. Enjoy your Sunday!!